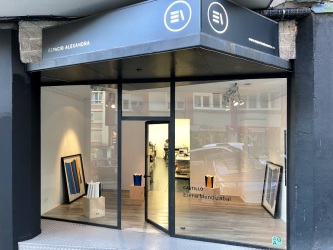 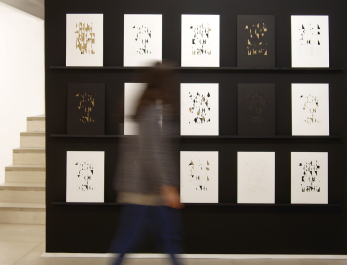 Ogami Press is a space for the production and edition of graphic art understood in a broad and expanded sense. His method of work favors the creation, collaboration and development of ideas and artistic projects away from the traditional concept of gallery.
For Impact 2018, she presents at Espacio Alexandra two of her most representative projects: 'Als Ob (as if)' by Pedro Luis Cembranos and 'Écrire en blanc' by Javier Pividal. In both the redefinition of the concept of graphic art from the languages of the most contemporary creation becomes evident.

'Als Ob (as if)' by Pedro Luis Cembranos brings together a set of pieces that, starting from diverse exercises of fragmentation, reproduction, repetition and replication of concrete elements of the environment and the way in which we formalize their representation, develops a series of works that play with the difference between the concept of multiple and single piece. The project uses mass and serial reproduction hundreds of copies of the same image repeated for the realization of a series of pieces where the successive copies are used not as a replica of an original but as part of a process of transformation of the represented, as a constant change of an idea through time.
'Écrire en blanc' by Javier Pividal encompasses a series of pieces developed from the design of an elementary and synthetic type that gathers some ideas of thought that Roland Barthes poses in his works. Pividal uses this unique, neutral writing, invisible as an iceberg, to write (draw) everything that can not be said.
On a technical level, this project involves an unprejudiced review of the use of graphic techniques. The artist uses lithography and engraving in a radically contemporary way, without any ties to the more orthodox technical tradition but with an exquisite execution that redefines the limits of the graphic.
Javier Pividal (Cartagena, 1971), lives and works in Madrid. The word is at the center of his artistic practice.
His work has been shown in numerous exhibitions in Spain, Europe and the USA. His recent projects include exhibitions at SCAN Proyect Room in London, Ogami Press, Estampa, José Guerrero Center, Artnueve Gallery and Espai Tactel, among others.
Pedro Luis Cembranos (Madrid, 1974) lives and works in Madrid. He develops a fundamentally installation work and his work has been exhibited in various exhibitions in countries such as Spain, Portugal, Germany and Cuba, among others.
Among his recent solo projects are "El Charly" in Matadero-Madrid, "El accidente de Vollard" in the Multiverso room of the BBVA Foundation (Madrid) and "Be part of my story" in the Visual Arts Development Center (La Havana). 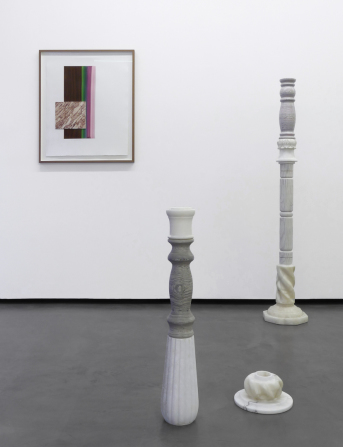