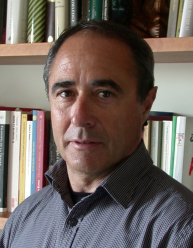 Since 1989, he has been developing a regular and continuous national and international exhibition activity, with more than 25 solo and several group shows. The highlights in his artistic trajectory are: National Prize of Printmaking of the National Calcography-Real Academy of Fine Arts of San Fernando, 2000; Spanish representation in XXIV International Graphic Biennial of Ljubljana, 2001; Guest Artist of the XV edition of the International Art Fair ESTAMPA, 2007. His artworks are in important national and international collections, among which are: National Calcography, Museum of Contemporary Spanish Printmaking and Berlaymont Summa Artis, belonging to the European Commission in Brussels.

From his Academic and essayist activity, stand out the books “Un ensayo sobre grabado” (An essay on printmaking), 1998 and “La Ilustración como categoría” (The illustration as category, 2004. Both have become reference manuals in graphics. In 2008 the first was published in Mexico in an updated edition for Latin America. Other books publications are: “Crítica de la razón plástica” (Critic of the visual art reason), 2011 and “Arqueología del Arte Moderno” (Archeology of Modern Art), 2015; as well as various articles and texts in magazines, catalogs and art monographs.