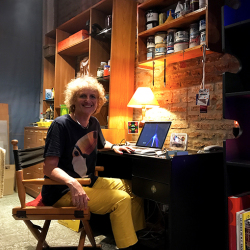 She attended the School of Fine Arts in Buenos Aires, Argentina and Paris, France, and several workshops (painting, drawing, printmaking, lithography). Since 2009 she is working with new media formats using the light as a primary element. Since 1990 she made more than 40 solo shows and participated in many group exhibitions, national and international competitions. On 2006 she published her artbook ‘DESTELLOS – work on paper 1985 / 2005.’ On 2011 she opened El Loft taller espacio de arte, in Buenos Aires, Argentina. On 2017, she published her Photobook ‘200 Instantes.’